Things You Should Know About Keeping Guinea Pigs 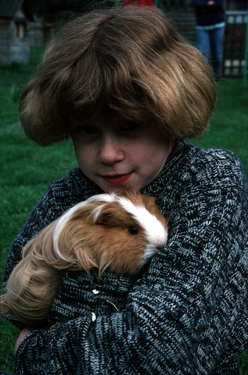 Guinea pigs originated in South America but were probably introduced into Europe soon after the first Spanish explorers returned from that continent in the 1500s. Even though they came from a sub-tropical area these rodents proved to be hardy and adapted to temperate climates. They became favourite pets in the early part of this century and are also bred as show animals with a wide variety of coat colours and fur types. Feeding your guinea pig is covered in a separate handout - here we cover housing and breeding.

What type of housing should I provide for my Guinea Pigs?

This is not particularly difficult and a large variety of hutches and cages have been used. Guinea pigs can be kept outdoors. A good draught-free but well ventilated mobile run on the grass is very acceptable as long as there is also a dry covered area. Pens should be at least 30 cm (12 ins) high to avoid escapes and should be covered with mesh to keep cats out. Indoor cages in the winter should allow at least 0.2 square metres of floor space per guinea pig. Since they are social animals guinea pigs can be kept in small to medium groups, but clearly mating will increase the number of animals so single sex groups are advisable. Temperatures between 12 and 20°C (52-68°F) are ideal. Anything over 27°C (82°F) will lead to heat-stroke, especially in animals that are overweight or pregnant.

They should not be kept with rabbits for two major reasons:

1.  Aggression. Rabbits (especially males) may be aggressive to guinea pigs.

2.  Many rabbits carry a bacterium, Bordetella bronchiseptica, that may cause severe, often fatal, pneumonia in guinea pigs.

Where owners have kept these species together make sure that they are fed a ration containing Vitamin C for the guinea pig and also a small tube or box that only the guinea pig may enter so it can escape the rabbit. 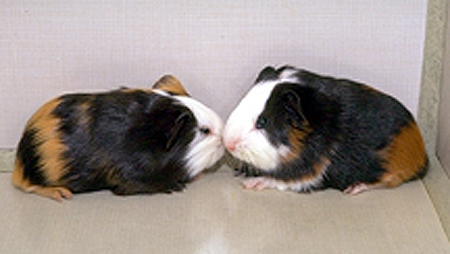 Can I breed from my Guinea Pig?

Guinea pigs are one of a group of rodents called the hystricomorphs with an unusual reproductive physiology and breeding strategy. Guinea pigs mature at around 3 months but should not be used for breeding for another three months. After about eight months of age the female guinea pig's pelvic bones become more tightly fused and if she has not had a litter by that time, producing young may be more of a problem.

You might ask why that is a problem since animals of most species can delay giving birth until they are older. The difference with the guinea pig is that she gives birth not to a large litter of tiny immature young (as the rat or mouse does), but to between two and four fully developed well furred offspring. The average gestation period is 63 days. These large babies have a hard time getting through the pelvic canal unless the mother's pelvic bones are relatively immature and malleable.

These large offspring predispose the mother to pregnancy toxaemia, where the metabolic load on the mother is too high resulting in low blood glucose and formation of ketones. This is especially the case where dams are given low fibre diets high in cereals. It manifests as loss of appetite in the early stages, deteriorating to muscle twitching and coma. Prompt veterinary attention (often involving emergency caesarian) can save animals but the problem can be reduced to a minimum by providing plenty of water and green foods during pregnancy, as throughout life.

© Copyright 2017 LifeLearn Inc. Used and/or modified with permission under license.