Beak & feather disease (Psittacine circoviral disease), is a viral infection that is seen to affect parrots and related species. It is often fatal to birds that contract it. It is believed to have originated in Australia and is distributed Australia-wide, including Tasmania. 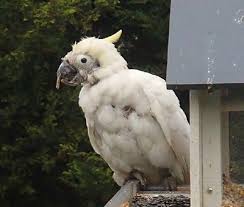 How is it spread?

The virus is extremely stable in the environment and can survive in nest hollows for years. It is difficult, if not impossible, to remove the virus once it has been introduced into a captive or wild population. Prevention is the best method of control as there is no effective treatment for beak and feather disease.

The virus multiplies in the liver and can be transmitted orally by food sharing through the bird’s crop, in faeces (fresh or dried excrement) or feathers and skin particles. It is highly contagious.

Clinical signs are highly variable depending on the age and species of bird. The progression of the disease is also highly variable which can depend on the individuals’ immune system.

In chronic cases, where the disease may be present for a longer period of time, the virus attacks feather and beak cells, causing abnormalities.
You may see irreversible loss of feathers, shedding of developing feathers, development of abnormal feathers, and loss of powder down. The beak may appear overgrown or abnormal, symmetrical lesions can become visible on the beak and occasionally on the nails.
It also attacks the immune system.  The virus attacks the bone marrow and destroys it, with the result of an anaemic bird with no defence against disease. They cannot resist infection with other viruses, bacteria or fungi.
Signs of acute infection include diarrhoea, weight loss, anorexia, depression and death.

Cockatoos are often brought into the Gisborne Vet Clinic with symptoms of beak & feather disease. Upon examination, the vet will check the state of the feathers. As feathers are infected they become abnormal and retain their sheaths, the shaft is full of blood, the base is often constricted and the feathers fall out easily. The bird will look untidy and dishevelled. White cockatoos often look dirty with shiny beaks and feet because the powder down, the white dust that keeps them clean, is absent.
One symptom is that both the upper and lower beaks overgrow and become very fragile. The soft issue underlying the keratin becomes diseased and dies. The result is that the overgrown beak breaks easily and exposes the underlying sensitive tissue, causing pain and a reluctance to eat. 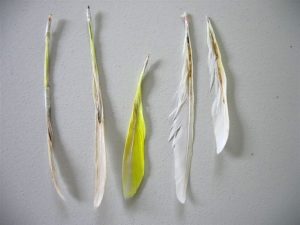 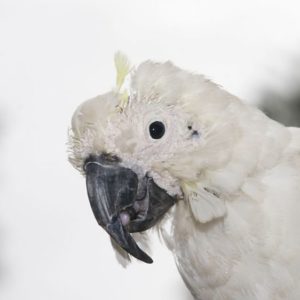 There is currently no treatment for beak & feather disease. For pets with this infection, we can support with good husbandry and nutrition, but they nearly always succumb to the disease in the end. For the unfortunate wildlife that come into contact with the disease, sadly, the outcome is humane euthanasia.