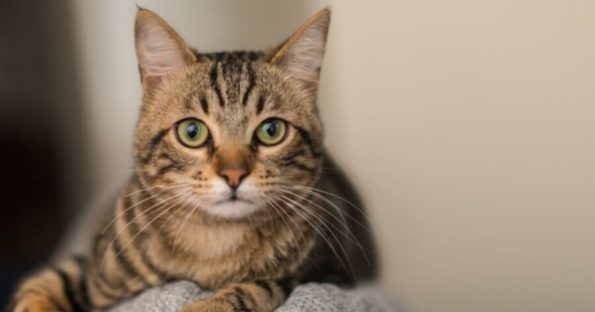 Hyperthyroidism (over active thyroid glands), is a common disease of middle –aged or older cats. Hyperthyroidism results from increased levels of thyroid hormone produced by the thyroid gland located in the cats neck. Most commonly, the gland has a non-cancerous tumour known as an adenoma, though rarely it can be as a result of a malignant tumour known as an adenocarcinoma.

Thyroid hormone has a role in maintaining underlying metabolic rate of the body and an excess of this hormone can be thought of as causing the body to run with the throttle turned up, i.e. can increase in the overall metabolism.
Clinical signs include:

A veterinarian may be alerted to the diagnosis of hyperthyroidism on the basis of the clinical history and physical examination revealing weight loss, increased heart rate, change on ocular exams and occasionally an appreciably enlarged thyroid gland palpable in the neck.
Blood testing will often reveal an increase in thyroid hormone levels but can also reveal changes in other organ systems such as the kidneys, which increases the level of suspicion. Urine analysis is performed concurrently to blood testing. Occasionally additional blood testing, to more specifically measure free thyroid hormone, is needed to establish a diagnosis.